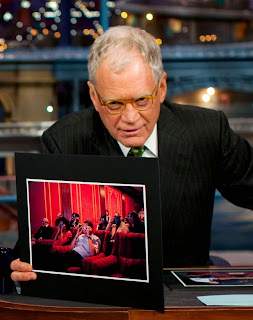 DAVID LETTERMAN Best Days Were Behind Him – Depended on Guests,Gimmicks
David Letterman was never really that funny. It was his guests, from Bud Melman to Rupert at the Deli to Chris (son of Bob of Bob and Ray) to the Pets of Pet Tricks that gave the show what life it once had. But it’s been a long time since those characters appeared on the show, for whatever reasons.  Maybe Letterman was ok as a straight man, but that was not his billing. Whereas Johnny Carson had various bits and famous characters , Letterman had no signature characterizations, unless you call his ‘Top 10 list’ a characterization  and some one-time classics like the ‘velcro’ bit that stuck. Throwing TVs and
other appliances off roofs may have been funny to some but it got old and was canned  – and much of what he DID DO
didn’t originate from Letterman. In fact, Letterman will admit attempting to borrow  from many REAL COMICS – Carson, Jack Benny, Steve Allen, etc. And, it still didn’t help.
He was turned down, to his dismay , as the replacement for
Johnny Carson over a decade ago because he wasn’t that good. Jay Leno was quicker, better joke teller and did a better opening monologue, as reflected in Leno’s higher
ratings.  Yet, Letterman remained on
the air at CBS largely for his political correctness, beloved by   his media mogul Les Moonvez (and much of Hollywood) for  his leftist slant, which began to wear thin as he continually deprecated anyone right of center .
But, In recent years even the gimmicks were gone and Letterman  reallyseemed to be  ‘mailing
it in. ‘    Only in these last weeks of
the show, when old leftist  guests like
TomHanks and Julia Roberts – and the President himself – would
show up was there a bit of excitement.
And, of course, Paul Shaffer was always great as band leader
, who  was, perhaps, funnier than Dave,
along with getting great artists to sit in with the band, ala Doc Severinson on the old Carson show .
During better times for the Letterman show, here Bud Melman tries to answer a viewer’s  question in a 1985 airing.  That character and   others’   often carried the show.

So, Letterman was allowed to coast with lower ratings until he admitted this year IT WASN’T FUN anymore; he had promised to retire when that time came .  As some pundits have said, he should have retired years ago,  with the gimmick guests like Melman and Rupert and Pet Tricks (borrowed from Ernie Kovaks)  who really made the show now long gone.   But, judging by Letterman’s actions, he was going through the motions at the end, just riding on his past and political correctness , which would bring him guests LIKE the President and  Hanks and most of Hollywood, which leans left.
Whereas Johnny Carson was involved in his bits like the Seer, Aunt Blabby, etc., Letterman was , if anything, the straight man for others and contributed little real humor, himself .  His penchant to continually put down Republicans like President Bush and the current long list of presidential candidates only turned off more people; Carson, Leno and others weren’t so political and were equal -opportunity  comics, keeping both sides aware and involved.  In recent years Letterman seemed to slow into an   un-funny, stammering old fool. If not for his old, loyal, politically correct friends – and the fact that Moonvez overlooked the lower ratings in exchange for Letterman’s politics- he would have been canned   long ago.
Who will forget the classic closing show when Bette Middler sang that tearful goodbye to Johnny Carson?  That was over 10 years ago. As Letterman even admits, or at least jokes about, the new, younger crop of comedians are funnier than he and it’s time for  him to move on, whereas   Carson retired   still at the top of his game. Doubtful Letterman’s departure will have the same impact.


Letterman’s Best Days Were Behind Him