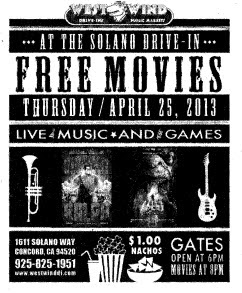 West Wind, which owns the historic Solano Drive In  in Concord, CA, announced that Solano will be presenting totally FREE  movies and  car entrance on  this Thursday night , April 25.  Not only can you   experience the last of a breed – the drive in movie that was so popular in the 1950s and has all but gone the way of Pee Wee Golf Courses and Roller Rinks with increased land values and the modern times – but it’s   FREE  for now.   Perhaps if there’s a big turnout they’ll keep running the promotion.

There were over 3,000 drive in movies during the height of their popularity in the 1950s. Today, there are literally a handful left
The  old drive ins, where kids were known to watch the ‘submarine races’ (ask your folks what that means) sometimes more than the movie itself , have fallen on hard times. With the advent of digital movie houses and increased land values – and people’s busy lives – the experience of putting the family in the car and spending the night at the drive in movies has become pretty much a thing of the past, except in Concord, CA and few other , mostly suburbs.    There are pitifully few drive in movies in the rest of the country – and pretty much limited to the warm weather states in the south.

So, if you’re lucky enough to live in the San Francisco Bay Area, check out what could be a once-in-a-lifetime experience. Who knows how much longer even the Solano will stay in business. We’ve lost most of our big city bowling alleys along with roller rinks, pee wee golf palaces and food drive-ins, so enjoy it while you can!
LIKE US? THEN PLEASE DO LIKE US!

I’ve seen just about everybody who’s anybody still performing on the ‘oldies circuit,’ if you will. However, I had not seen Dick and Dee Dee.  When I read that they wouldl be  performing in the area  I became real curious, especially since Dick passed away  in 2003.

Sat night June 11 was was American Grafitti Day in Modesto, CA, home of the George Lucas 1973 movie classic depicting an early time, 1962. (Hard to believe it’s another40 years since then, as noted by John Milner-  the hot rodder in the yellow car, from the moie- madefor an interesting MC of this show. ‘I was in my 20s then and now I’m in my 60s.It was like being with family, people we grew up with andwith which we could relate.

The show was relective of what we’re seeing in oldies shows today. As there are feweroriginal acts, we had two tribute groups and two originals. A Supremes group opened the show, trying their best to copy the originals . ‘I’m Diana,’ purred  thelead, resplendent in curls much like Ross’ look in later years. The act was forgettable.to say the least for this listener.

After what seemed like too long a segment, Milner finally came out and announced the nextact, Johnny Tillotson. I’ve seen Tillotson several times and he performs welland is good with the crowd. He only had one big rock and roll hit in the day, ‘Poetryin Motion,’ but what a hit. The audience chimed in from the opening preface ‘ When ISee My Baby. What Do I See?…Poetry in Motion’ and then takes off with its infectiousbeat and sound. The song is a early 609s pop rock classic the audience ate up.The earlier songs were all pretty good too but didnt have the same audience appeal. Tillotson was one of many artists who had a number of ‘cross-over’ counntry-pophits in the 60s, including ‘Send Me The Pillow.’ recorded by Dean Martin and othersand ‘It Keeps Right On a Hurtin,’ recorded by 112 other artsits including Elvis, according to Johnny. Tillotson could have been big on the country circuit if hewasn’t. (Will have to check out the old country charts; bet these scored high.

JOHNNY TILLOTSON HAD MANY CROSS-OVERS, POP HITS IN 60S

After intermission, Dick and Dee Dee ran out on stage, breaking into ‘Thou ShaltNot Steal. There was waif-like Dee Dee and a gray-haired Dick,   looking a l ittle too young too be originals, but they sounded just like the record. ‘Dick’ even had the falsetto part down to a tee. Maybe this WAS the ghost of Dick St. John, who passed in a roofing accident in 2003 when he fell off a ladder. Dee Dee let us believe it was the real Mccoy until she told about   Roy Orbison stopping by their dressing room  in 1961 on tour,  and how  Orbison gave  St. John his Beatle boots after Orbison had been admiring them (and before the Beatles wore them).Then, in tribute to ‘one of my favorites,’  the duo did a cover of the great orbison ballad, ‘Crying,’ which was wel suited too their voices, ala the Orbison- kd lang version from 1987.

Later research showed the current ‘Dick’ to be Mark Dunn, an actor/artist and NOT current ‘partner’ of Dee Dee. (OUR ERROR, having previously said that they were life partners. Our apologies to Dee Dee, her real husband and Dick . They live in Pacific Palasades near Los Angeleswith three children. Dee Dee has recently  written her memoir, Vinyl Highway,about a shy 18-year-old being thrown into the spotlight after her first songwent to #2 in 1961, meeting Orbison and the big names, trouble touring and such.Looks like an interesting read , available at DickandDeeDee.com.From their website, it looks as though there’s very little touring, so it was good to finally catch this one, spirited act.

Unfortunately, the sound at the newish Gallo Center for the Arts was not what it should be for a state-of-the -art facility, but I’ve heard worse, too.All in all the two original acts, Tillotson and Dick and Dee Dee were worth the price of admission and, because of the few acts on the bill, we got to see them perform some songs they don’t normally do such as ‘Crying.’ The final act, another tribute group, which  covered  the Temptations, was weak, only slightly better the the faux Supremes who opened the show, althoughthe audience, much less picky than this reviewer, seemed to like them (someprobably didn’t realize therre were no originals in the group.
The backing band was the same for all performers with lead guitar, bass, drumsand keyboard. They are the same ones who’ve backed most of the oldies shows at Gallo in recent years and do a very adequate job, in my opinion.
It was good to get out and hear some oldies, the first such show I’ve seen this year. Now, with summer here, there should be a few more coming through townand we’ll certainly keep you up to date – and would also love to hear your reviews of such shows in your area.
-BK

It was  a fun ‘throw-back evening, as it usually is in Modesto, concert or not.  Modesto is where Lucas grew up and  the sleepy town int he middle of nowhere was AND IS STILL very much lilke it was in the fifties, WITH  still-active drive-ins, old movie houses, cruisin’ McHenry Ave and lots of friendly people…even a tiki bar or two thrown in…Minnies

MODESTO HOME OF  AMERICAN GRIFFITI –  STILL HAS THAT 50S  VIBE