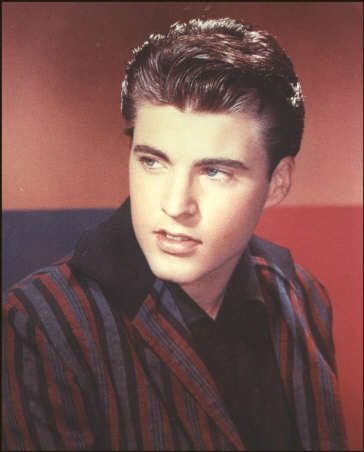 This is an even more complete, updated comment (appearing with the above video on Youtube) about the crash – this   from Rick Nelson’s daughter ( who  is famed performer    Tracy Nelson you may know from Square Pegs and the show where she played a nun among other film   work .

‘He bought Jerry Lee Lewis’ old DC3 that had a constant fuel line problem in the old propane heater on board. It caused many problems and delays, the band was once stuck on the runway on the way to Farm Aid because of it. My father’s corrupt manager at the time who I will not name did not pay the maintenance bills on time (ever) and on the New Year’s flight the propane was leaking onto the carpet in the rear of the plane from a leaking cap that had not been put on correctly and was in fact broken anyway. My father actually bought commercial tickets for the band to get to Dallas that night, but Manager said “no, we’ll fix it in Dallas.” Midflight pilot tried to turn on heater, it didn’t work, he went to back of plane to fix it with a wrench, yelled to co-pilot to turn it on from the cockpit. Co piliot said no so he went up and did it himself. Spark caught fuel on the carpet, plane started smoking, they tried to land on a highway but 2 cars there didn’t pull over just stopped, pilot took plane around again and by that time fuel in the fuselage had caught fire. Plane actually landed, but was on fire, no one could get out except the pilot and co pilot who got out the cockpit window. As they were crawling through the grass the pilot said “don’t tell anyone about the heater.”. Everyone else was found piled at the cockpit door. My father was found lying on top of his girlfriend with his arms out as if protecting her. the story about cocaine was a complete fabrication by the Washington Post who later retracted it, unfortunately no body bothered to read that retraction a year later. Even after the FAA and NTSB reports and press conferences, confirming it was the heater. I miss my dad every day. BTW- the Manager received $500,000.00 from a “key man” life insurance policy he had on my father, who was about 2 million in debt when he died. That is what happened to Ricky (he very much preferred Rick,) Nelson. Thank you, Jerry.’

It’s sad to think that that beautiful Nelson family is gone now. Father Ozzie passed prematurely , of cancer,  at 69, Mother Harriet died at 85 and, most recently brother David in 2011 also died of cancer at the relatively early  age 74. Daughter Tracy, who comments above,  has survived  serious bouts of cancer but Nelson friend, Pat Upton , who brought Rick to Gunterville for his final shows ,  just recently passed, himself.  The story about the python snake in the amplifier at those last shows adds more intrigue to the story. Does anyone know if Rick’s son Gunter was named, perhaps after his good friend’s town, Gunterville? As far as we know , the Nelson boys continue performing their tribute to Rick Nelson after a hit career of their own.

Much has been written about the Nelson family, often depicted as the ‘ideal’ family  of the 1950s/early 60s era. We know it wasn’t really so ideal, what with a task-master father , Ozzie, who, perhaps like Murray Wilson (father of the Beach Boys) and other strict fathers of the era wasn’t always the easiest on young Rick, though who probably was responsible for getting Rick before the American public. One such read that may be the most accurate is ‘RICK NELSON’ by JOEL SELVIN.

Interesting interview with Rick, two years before his passing and before a return to Madison Square Garden. Rick corrects the story about
“Garden Party’ while co-anchor Connie Chung makes a big faux paw , which Rick accepts kindly.

David Nelson ‘says goodbye’ to his brother with a Disney tribute ‘ A Brother Remembers’, which he talks about here in a 1991 interview with Charlie Rose.
Nelson also seeks to ‘correct the record’ of unfounded news reports regarding the cause of his death. David also comments positively about Dad Ozzie and family, calling it a ‘wonderful’ family.

Early video of Ricky and Glen Campbell doing ‘Louisana Man.’By the way, Glen Campbell remains in relatively good shape, considering his Alzheimers diagnosis, says older son Travis in a recent interview with J Cassell (one that we may try to reprise in these pages. Travis a wonderful son who has dealt with a lot of personal tragedy while trying to help with his Dad’s illness

First Music Video? This video of ‘Travelin Man’ is regarded by many as the first real music video

Rick Nelson performing with one of his idols, Fats Domino, of whom he recorded several songs like this one, ‘I’m Walkin.’ I was luck to see
both them in a rare live performance,in Concord, CA, only months before Ricks passing in 1985. I assume Rick had the same manager, who we was friends of my friends, who , to balance the controversy, had nothing bad to say about him (no mame mentioned here but it is the same nmae of a famous country singer).

Rick Nelson had recently finished working on the Sun Reunion album with Orbison, Lewis, Cash and Perkins. Rockabilly was probably Nelson’s favorite music and the focus on his final album.

MAY SEE THE LIGHT, SON’S

It’s been a secret or little known to many of us that Rick Nelson had been finishing work on a new studio album at the time of his passing on December 30, 1985, according to his long time manager, Greg McDonald, who claims to have possession of the master tapes, we learn from an article in Examiner.com, March 30.

The album was recorded as in the ‘old days’ on a three track tape recorder yet with modern studio production.  A huge devotee of Sun Records, We believe Rick liked to keep things close to the original sound and the album is said to consist of mostly rockabilly. Earlier in the year, Rick had played on a ‘Sun Reunion’ album of Jerry Lee Lewis, Johnny Cash, Roy Orbison and Carl Perkins.

After Rick’s passing, the article states that famed Everly Brothers guitarist, Albert Lee, added guitar tracks to the album, according to the article.  Yet, the key element of Rick’s only backing, over-dubbed vocals were not yet added.  Some feel the album , in its current form would not do justice to the Nelson legacy, yet McDonald hopes to finish it and get the album finally released.  If it could be done properly – perhaps with Rick’s sons Matthew and Gunnar supplying the needed harmonies why not finally get it out for this Dec 31, the 30th anniversary of Rick’s loss in the plane crash?  Exciting news to say the least if what we read is correct.

Included in the ‘final cut’is an updated version of the Buddy Holly classic, ‘True Love Ways,’which Nelson had recordedearlier, as we hear here.

Meanwhile, the same article – and quite a long, in depth article at that- tells us that Rick’s youngest son, Sam is an accomplished singer/songwriter in his own write and has made a tribute to his Dad which should be released shortly. Sam was only 11 when Rick passed and he learn that he never got to spend a lot of time with Rick due to factors including an accrimonious divorce. These factors probably also were a factor in why Rick’s last album was shelved and forgotten – until now.

For the original Examinar story

Happy Birthday TRACY NELSON, 6th generation performer and daughter to Rick Nelson, who turns 50 today! Talk  about a survivor, this woman has come through  three forms of cancer and other illnesses – not to mention losing her Dad, prematurely, uncle Dave recently and grandparents, while maintaining a film career. She has  written a book about her  life of ups and downs and has a movie script   in the works about her famous family.  http://en.wikipedia.org/wiki/Tracy_Nelson_(actress)

Thats Tracy , lower right, next to her rock and roll brothers and Dad, Rick, above, and Mother, Kristen.

Quite a family, from Happy Days to some very sad ones. We wish Tracy the best on her birthday and everyday