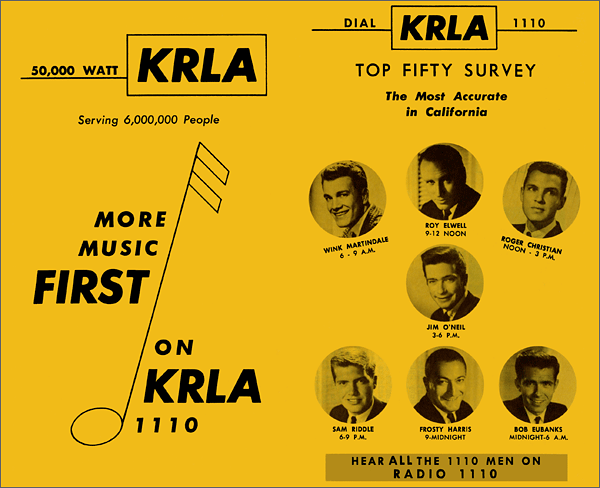 Last Sat night was a treat with  Ride Radio (Seattle) and/or Top Shelf Oldies http://www.topshelfoldies.org/ playing the Top 50 from L.A. Powerhouse KRLA… One of the best surveys ever from this week in 1962 (Oct 26) as below…Fine guest DJ sitting in for the great Johnny G ….just heard #18 and #17  Torture by Kris Jensen and Leah by Roy Orbison. Don’t miss this Memory Flogger on future Saturnight nights, featurly various local, hometown surveys from the Golden Era… sounds you haven’t heard in years will bring back great memories. For now, we’ll highlight some of the show’s survey hits and other multi-media from that great LA station some of you probably grew up with.  Let us know what you think and we’ll try to bring you some more ‘Hometown Countdowns ‘ surveys from various city and highlight some of the songs ini the future… After we hear the #50 hit, we’ll have  a visit with original KRLA DJ , legendary Huggie Boy….

Let’s start things off with highlights from the above survey, counting backwards starting with #50 and the great Paul Anka and Esso Besso,  a little bossa nova thing from Paul Ankahttps://youtu.be/UV5S5FCjMeY

Checking in at #47 it’s   by Carla Thomas – her answer song to  to Sam Cooke’s original ‘Bring It On Home to Me’ https://youtu.be/9hnJALVZDXo

carla thomas i’ll bring it on home to you
carla answers sam
YOUTUBE.COM

We’ll Get Back to the survey in a minute, but let’s say hello to the top DJs of the Golden Era

KRLA, PASADENA NOV 6-13, 1960  – Remember any of these DJs. We do -3 would go on to big TV gigs – Wink Martindale as a recording artist, DJ and game show host; Bob Eubanks as a rock and roll promoter (Beatles and others), DJ and game show host; Jim O’Neill as host of Shindig and other things, and Kasey Kasem would come soon to KRLA shortly after this survey. See additional survey and DJs below

As promised, one of LA’s premier DJs, Huggy Boy, who was still announcing up to a few years ago. He has since passed. Others were Hunter Hancock, who also lived long and then there’s Art ‘Mr Oldies But Goodies’ Laboe, who is STILL announcing after all these years… to the mainly large chicano market that LOVES oldies in L.A. KRLA and KFWB were THE stations during the era. We’ll get into the DJs another time…https://youtu.be/zeJDDXJpe5A  Hugg was a fixture at KRLA not only in the late 50s and early 60s but years later when KRLA lived on as an ‘oldies’ station. Hugg passed in 2012.

Huggy Boy at KRLA radio
“Huggy Boy” (Dick Hugg) in this rare news story (that we did in 1998) spends time talking about old rock & roll radio, the early days of L.A. rock and a surp…

Art Laboe is probably the last remaining active oldies DJ from the era, broadcasting Sunday nights KQIE . He’s a young 90 now and been around since the inception of R and R, helped promote the LA doowop sounds of the Penguins, Larks, Shields and many more on his Oldies But Goodies albums (he also coined the term) https://youtu.be/G03f_sCDBG0. Interesting how so many of the LA disc jockies have lasted, at least until recently. Wolfman Jack was another who spend a long time on LA stations including KRLA…

The Art Laboe Connection on KQIE Q1047
Your Sunday nights are not going to be the same! Legendary Radio DJ Art Laboe is back on Q1047 every Sunday from 6:00pm to midnight! Playing all…

and then there’s THE ONE AND ONLY WOLFMAN JACK who came to KRLA. Here’s a classic aircheck of his https://youtu.be/GnJXLwnWDxI

The surveys back then had a lot of variety- all genres really including novelty, which you might classify this one by Jimmy Dean, Little Black Book that comes in at #40 this week in 1962https://youtu.be/9oQyNlYPNVU

Midnight Sun was a jazz standard l, a tune adapted as a pop tune by the 5 Whispers, an instrumental ‘extra’ reminiscent of Santo and Johnny you would have probably heard on KRLA also in 1962https://youtu.be/dHXUFjknWLo

NOW, LET’S HEAR SOME OF THE GREAT JINGLES, INTROS and OUTROS you heard/ are hearing on KRLA thru time travel

KRLA jingles, DJ intros and sign-offs from the Golden Era of ‘the 11110 Men’ https://youtu.be/-YzFGAEW24Y Note the DJ names like then fast-talking Bob Eubanks and and Wink Martindale,another game show host who actually had a hit record (know it?), . KRLA was a true powerhouse, competing heavily against KFWB and later KHJ. Now they’re all memories… The call letters amy still be there but that’s about it… but they live on here!

From 1961 -one KRLA DJ was especially big on the East Coast, one Dick Biondi, who amazingly , is still on air today on WLS FMhttp://www.947wls.com/dick-biondi/ Chicago… learning a lot tonight on the Local Countdown show, which airs each week at this time on RIDE orhttp://www.TopShelfOldies.com 7-10 pm… Currently Elvis’ Return To Sender #6 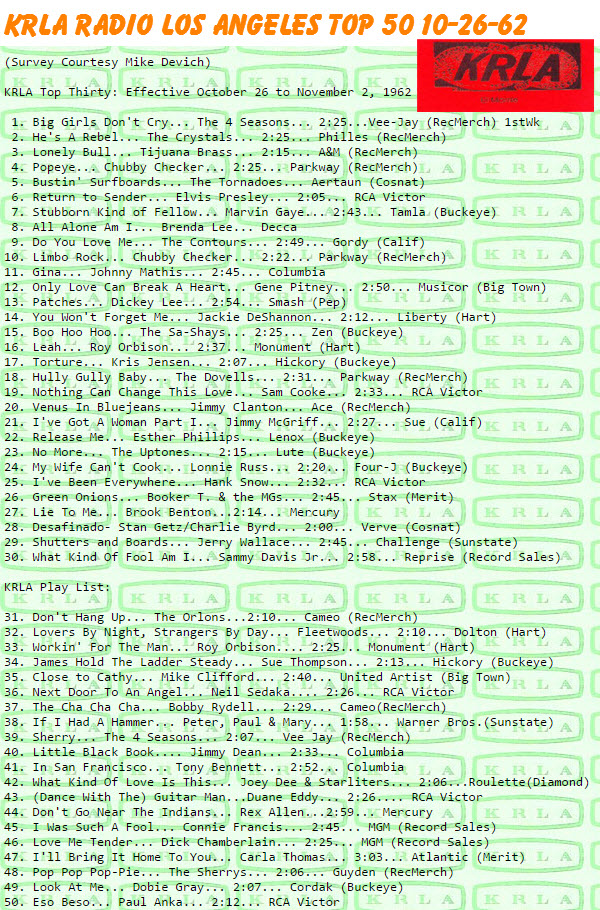 Do to time and media constraints, we’re going to jump to the TOP FIVE songs on KRLA the week of Oct.26, 1962…

The surf craze is hot and heavy, especially in LA and Currently playing at #5 Bustin Surfboard by the Tornados https://youtu.be/HGBIirV_9MU

And at #4 a personal favorite, Popeye, from Chubby Checkerhttps://youtu.be/Hn0rihraUiA

#3 THE TIJUANA BRASS – The Lonely Bull

The hometown countdown continues with the new sound of Mexico from Herb Alpert and the Tijuana Brass with the Lonely Bull at #3https://youtu.be/0EDW6gEQ2DU

48 down and two to go…Well, you probably already know since we put up the survey (should have kept it a secret)… at #2 it’s Phil Spector‘s Crystals and a song written by Gene Pitney, ‘He’s A Rebel’https://youtu.be/G_SXJ18EkNw

Before we hear the #1 hit of the week of Oct. 26, 1962 let’s hear from one more legendary Los Angeles DJ, HUNTER HANCOCK as we go ‘Huntin’with Hunter,’ as his show was called

Hunter Hancock goes back before rock and roll when he broadcast rhythm and blues in Los angeles… and broadcast un until a few years ago. He was perhaps the highest regarded of them all and had a real energetic soung… and helped get rock and roll into the mainstream playing and promoting the LA groups like the Olympics, Penguins and others… https://youtu.be/LVLmRLLrXtw

Drum Roll please…#1 with those boys from Jersey who are on a roll with the Four Season’s second no.1 in a row , ‘Big Girls Don’t Cry, following Sherry, which has dropped down but remains on this survey… Thanks for joining in on this classic KRLA survey on the Hometown Countdown Show… Until next week…It’s the Bopper signing off …Ending up with live performance of the song https://youtu.be/40bTOCv3_ak 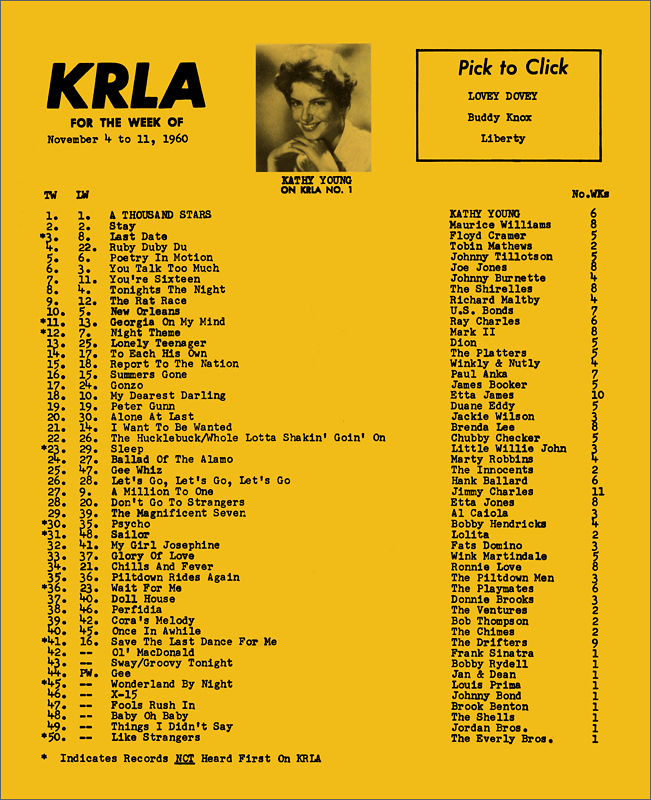 We’ll leave you with this survey from KRLA  from 55  years ago next week…  Thanks for listening and viewing .We’ll do it again, perhaps Saturday night simulcast with TOP SHELF OLDIES!
SEE YOU LATER ALIGATOR…

He’s survived Hunter Hancock, Huggy Boy and all the other LA DJs and has built a continued following in not only Los Angeles but the entire southwest, largely with the Mexican American population; many of grown up with Art  – not to mention their folks. He’s stayed up with the times, including later music but stays true to the origins, the fellas that were on his Oldies But Goodies albums, many for whom Laboe gave their start… Nice to see this kind of loyallty today in a world where radio personalities don’t last very long. But, more importantly, it’s wonderful to see someone like Laboe who has worked hard and still enjoying his work 6 days a week. Age is only a number but few can or have done what Art has done.  Check out his sunday night show.. Just search  ‘Sunday Night oldies or ‘Art Loboe.com’ and you’ll find him! We all know by now that it was Art who coined the term ‘Oldies But Goodies’ and still sells the iconic albums bearing the name – all 21(?) volumes

A fixture in radio for more than seven decades, Art Laboe started his radio career in 1943 at KSAN/San Francisco. In 1949, he began his lengthy association with Los Angeles radio, hosting an all-night record show from Scrivner’s Drive-In on KXLA (later KRLA).

After a stint at KFWB interviewing celebrities at Ciro’s Restaurant, Laboe returned to Scrivner’s in 1955 for a top-rated afternoon record show on KPOP. Here, he coined the phrase “Oldies But Goodies,” the inspiration for his series of top-selling compilation albums.

In 1972, Laboe joined KRTH/Los Angeles as it became the first full-time “oldies” station. Four years later, he returned to KRLA as a part-owner, on-air personality and program director. Between 1976 and 1981, Laboe led the station from 49th to first place in the ratings and was awarded a star on the Hollywood Walk of Fame.

After working at KFI and KRLA during the 1980s, Laboe moved to KGGI in 1991 with Art Laboe’s Sunday Special at KGGI, which is syndicated throughout the western United States. Laboe also hosts The Art Laboe Connection, a nightly request show on KHHT that is heard nationwide on iHeart Radio.

Laboe is a Captain in the U.S. Army Reserve due to his work with the Armed Forces Radio and Television Service.

Art Laboe was inducted into the Radio Hall of Fame in 2012.

Keep on going for many more years, Art, the Legend.

ABIE’S DOOWOP TAXI – Came upon this great site featuring great Oldies DJs like Jack Rivers, thanks to friend and great singer-IMPRESARIO-Orbison fan PAT BENTI-  A DJ Directory of the greatest music ever recorded,the DJ’s on the internet who play this music and where you can tune into their shows.    Click below Jack’s picture to hear some of the greatest interviews you don’t find much of anywhere – Jay Siegel, Little Anthony,Larry Chance, etc  etc    …enjoy some great photos and videos…

Check out groups like Larry Chance and the Earls. Hear Jay Siegal of the Tokens  interviewed and visit his site , including  full versions of  the songs, tour dates and more  @ www.JaySiegalandtheTokens.com