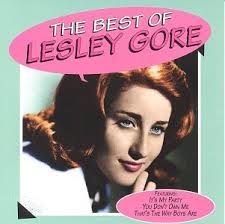 Leslie Gore on Cousin Brucie’s 60’s show , Sirius XM, not long before we left her. One of many qualities of Gore is her ability improvisation. Notice her stylized changes to Maybe I Know and , also, her ‘blues’ singing. Yes, Leslie hits alot of colorful ‘black’notes such as the high ‘-5’ note on othe fade out of ‘It’s My Party.’

Like Leslie Gore, the Oldies? subscribe to our weekly updates which include deals and discounts and success tips along with oldies news, music, movies and memories…

Wonderful tribute to mid-60s pop -rock sensation , Leslie Gore who passed last week, from an oldies fan, newsman James Rosen.  Rosen may be  too young to  remember the heyday but who is right  on an interesting critique about an ‘outisder,’ if you will, who  somehow perservered in the midst of the British Invasion and a male-dominated music scene.

Such was the tormented portrait of everyday life for affluent white schoolgirls in mid-20th-century America that was sketched in song by Lesley Gore, with the aid of her brilliant (and African-American) producer, Quincy Jones, in the pre-Beatles AM-radio heyday of the early 1960s. If it is true for us all, as Kurt Vonnegut wrote for himself in 1970, that “high school is closer to the core of the American experience than anything else I can think of,” then the Lesley Gore songbook offered a definitive chronicle of the American experience – and the unexpected announcement of Gore’s death last week, from lung cancer at the age of 68, should have occasioned a greater sense of loss, a wider tribute, from the public at large. CONTINUED

Leslie Gore didn’t write any of her many hits. She was handed songs and lyrics to mouth, which as a ‘good girl’ of an innocent era went along with.  In fact, Leslie , herself , didn’t even know she was gay until later, in her mid twenties, according to a 2011 NPR interview.  Yet she would be able to deal with the conflict and even continue to sing those early songs despite the contradiction with her later-discovered lifestyle.  Though she would later become an advocate for women’s issues,  she did it in a low key way.  She said she preferred things ‘natural’and when confronted by some that she had never ‘come out’ she said she never DIDN’T come out.  By participating in programs like ‘In this Life’  she openly embraced the lesbian /gay lifestyle.  She never thought it necessary to make a big issue of her gayness. She didn’t seem the type to  NOT do it as a career move – her biggest days were already behind her – but she simply ‘lived her life the way I want’ (per the lyrics of ‘You don’t own me’ which was a more low-key, natural existence.
Gore was well-liked by fellow performers, male and female alike. ‘Lightning’ Lou Christie, was a close friend of Gore’s and sang with and recorded a duet with her (see list tribute statement below) and there were many others like Dion, Ronnie Spector, etc (whose comments you can see @ https://www.facebook.com/OldiesCountry) . As noted in Rosen’s article, Gore was a frequent guest of popular DJ ‘Cousin’ Brucie on his Sirius XM oldies show.  Though looking back her life was , no doubt, not always easy , going through formative years ‘miscast,’as it were.  Yet, things worked out, and at least one of those hit songs, ‘You Don’t Own Me’  Gore could later look back at with pride as the lyrics were anything but offensive to her later beliefs. Who knows? Maybe even early in her career she gave voice to help choose that record with latent feelings inside.  Glad she did if she did. But even without the , perhaps, biographical song, Gore should be proud with her career, during which she stayed on the charts as long as the Beatles, with  10  Top 40 hits spanning 1963-1967. 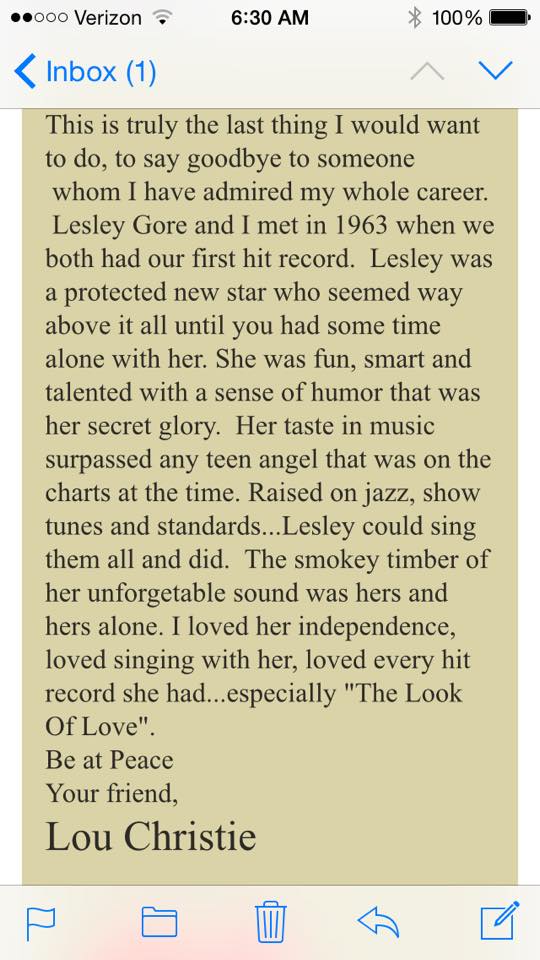 I wouldn’t know that other early hits ‘imprisoned’Gore, as Rosen states. It no doubt was an ironic aspect to Gore’s career, but I think Gore just went along with it, accepting that was the way that was, just like when a singer ‘covers’ a song with lyrics that apply to the opposite gender, i.e. the Beatles singing ‘Boys.’   So what if Rosen missed a point or two.  Sometimes one can only guess what another was feeling.  His was an excellent tribute, again, from someone ‘out of the era’  but probably comes very close to understanding, if not all the way.
Later, Gore WOULD write some of her own songs, including the interestingly existential ‘Immortality’ on a more personal breakthrough album in the 1970s.  She was working on a memoir at the time of her death, we are told.  Perhaps her long time partner – who better?- can help finish it and we can learn more about this seemingly wonderful singer and person, Leslie Gore, survivor.
We actually  heard several tributes to Gore besides that of Cousin Brucie, Sirium XM. Wild Wayne of the Memory Machine, WWUH, Connecticut, did a wonderful show Sunday, where he took us, in chronological order, through all Gore’s big hits with stories to along with the songs. Rockin Jim did a short tribute on his Grinder’s Graveyard, normally a rhythm and blues show on KPOO, San Francisco February 16. I had to flip back and forth to catch Cousin Brucie’s tribute, which was on at the same time. Wish we had those recorded and available.  I’m sure there were others, too.  Let us know. There certainly were a lot of tributes, many of which can be seen on our facebook page by scrolloing down around Feb 19 . Let us now if you heard othershttps://www.facebook.com/OldiesCountry 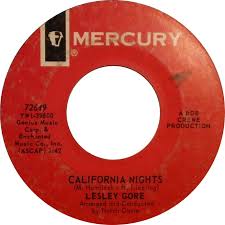 Often overlooked, California Nights was Leslie Gore’s last big hit, charting at #16 in 1967 -it was a haunting, Spector-esque compostion by Marvin Hamlisch, who had written her previous hit, a very different ‘Sunshine, Lollipops’ the year before. Sadly, Hamlisch also recently passed at an early age.
With this song, Gore was able to say on the charts thorughout the British Invasion/Beatles era, 1964-1967, an accomplishment not many American artists would match.
See Leslie perform debut the song as Pussycat before her Batman friends

Almost too unsettling to put the news of loss of yet another of our pop/rock and roll and formitive years heros/heroins described by so many as a wonderful, caring and giving person in addition to being a great singer with many songs that … See More
I was just thinking back to one of several concerts at which I saw Leslie Gore perform.
Many articles have talked about her personality and lifestyle, but somewhat overlooked has been her great voice and musicality. Add that to great production from a young Quincy Jones and you had some truly fine songs, call it rock and roll or pop. The blend of guitar with horns and rythm was truly magical to a young kid, like myself at the time.  In those later concerts at which I saw Gore perform – like at Circle Star theater in the round, San Carlos, CA probably late 1980s – I was struck how even better Gore sounded live with blaring sax and skip-beat (as I call it) rythms provided by the Monte Carlo band from Los Angeles, as I recall.  Most artists sounded better on their records. As good as her records are, Gore sounded EVEN BETTER in person I would discover. Her recent performances at Cousin Brucie’s Palasades Park Reunion were extroardinary with a great , updated arrangement of ‘It’s My Party.’

Lesley Gore – The Old Crowd
The most commercially successful solo singer to be identified with the girl group sound, Lesley Gore hit the number one spot with her very first release, “It… 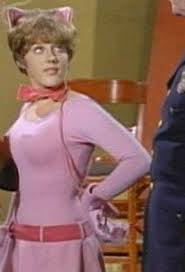 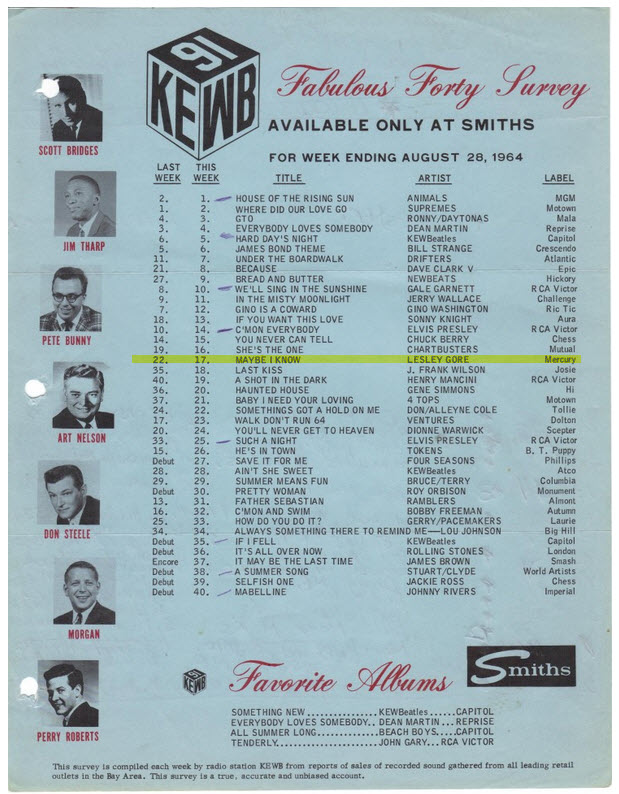 NBC – Singer-songwriter Lesley Gore, who topped the charts in 1963 at age 16 with her epic song of teenage angst, “It’s My Party,” and followed it up with the hits “Judy’s Turn to Cry,” and the feminist anthem “You Don’t Own Me,” died Monday. She was 68. 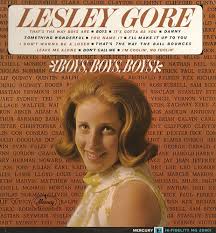 One of her many albums, this featuring single ‘That’s the Way Boys Are’ 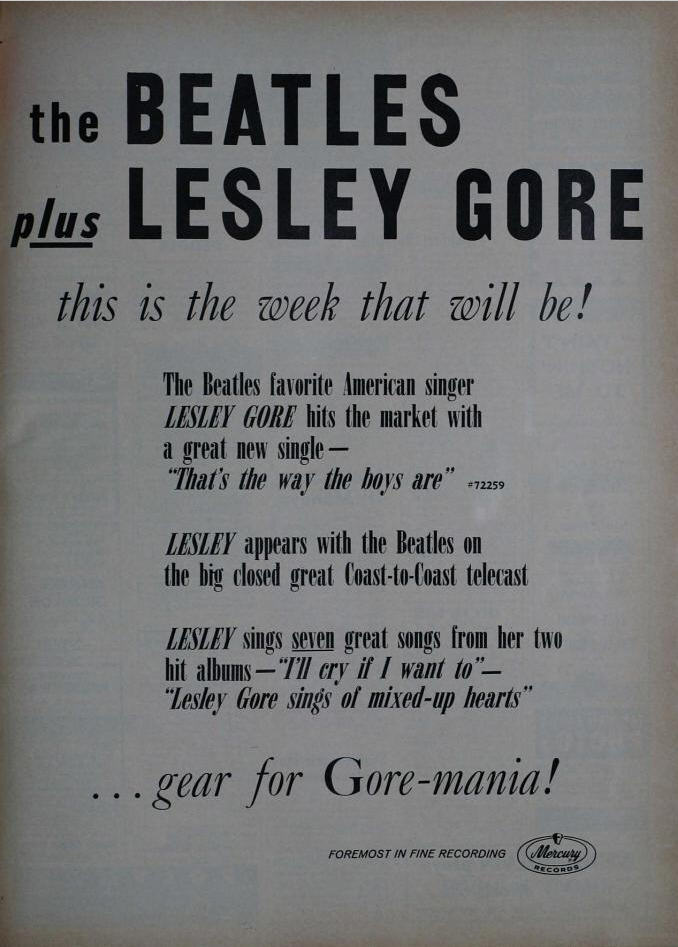 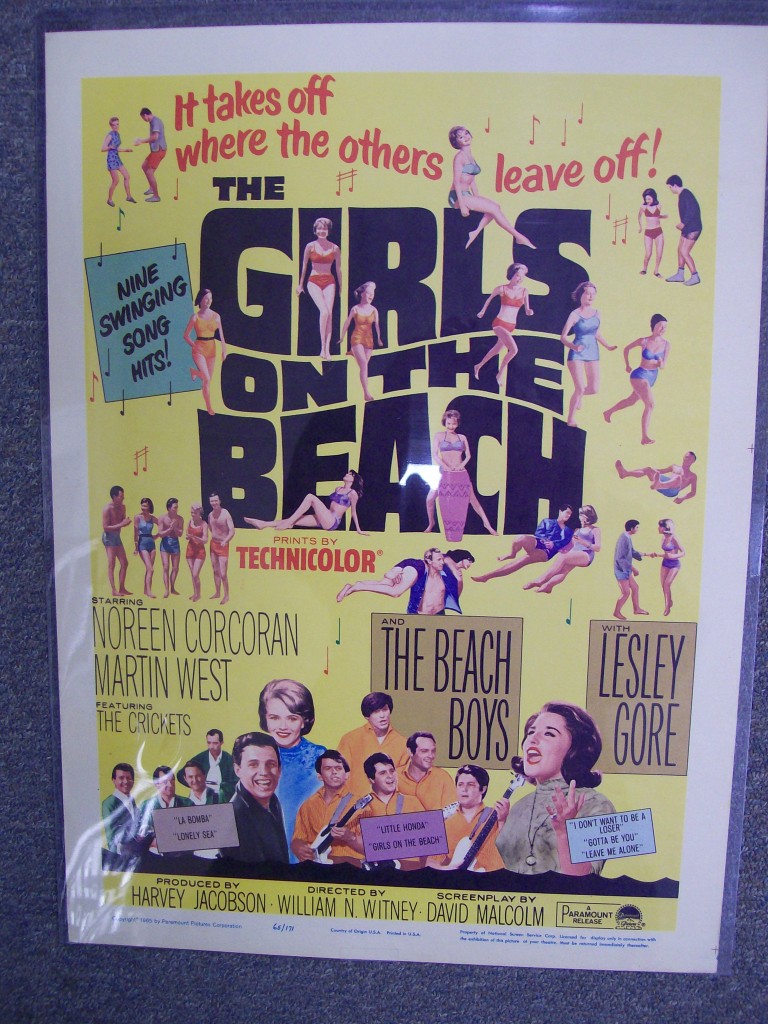 Can you name the songs that Leslie Gore sang in this 1965 movie, ‘The Girls on the Beach’?

A bevy of famous ladies sing along to this 50-year-old classic. Wow. This song is magic.

Gore was one of the first to bring feminism to music with ‘You Don’t Own Me’ in the mid 60s, later reinterpreted for reproductive rights

LOU CHRISTIE, a good friend who performed often and even recorded at least one song with Leslie Gore, from a spokesperson:
‘Wanted to tell everyone that Lou lost a VERY GOOD FRIEND !!! Lesley Gore died today at the age 68.!!! R.I.P Leslie will be truly missed.A Great Talent !!!’

LOU CHRISTIE
Lesley Gore & Lou Christie….Friends Forever..
America’s Sweetheart–Lesley Gore
‘Here is a song I (unnamed person says he) wrote with Lesley that was never recorded.’ A shame. Still think it could be a hit. What a thrill to hear it with a full band.’ It’s an interesting later single that reflects back on a career that wasn’t always so rosy for Leslie when she was known ‘as ‘America’s Sweetheart’ in the mid-60s.

I’M GOING OUT THE SAME WAY I CAME IN – A good 60s driving song with Spector and Four Seasons overtones and arly feminist lyrics. Hadn’t heard this one before.

Often overlooked, Califronia NIghts was Gore’s last big hit, charting at #16 in 1967 -it was a haunting, Spector-esque compostion by Marvin Hamlisch, who had written her previous hit, a very different ‘Sunshine, Lollipops’ the year before. Sadly, Hamlisch also recently passed at an early age.
With this song, Gore was able to say on the charts thorughout the British Invasion/Beatles era, 1964-1967, an accomplishment not many American artists would match.
Click here to see and hear Leslie debut the song as Pussycat before her Batman friends

Like Leslie Gore, the Oldies? subscribe to our weekly updates which include deals and discounts and success tips along with oldies news, music, movies and memories…