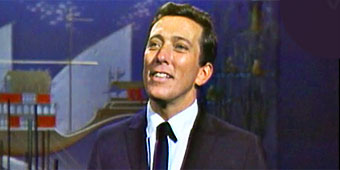 He was much like the Osmond Brothers he would later help bring to prominence. Williams was the clean cut guy next door; he could have been the Nelson’s neighbor. No, he wasn’t even Hollywood. He was more Great Wall, Iowa, where he grew up – or Branson, Mo. where he was the first non-country act to open a theater in a resort area of over 80 different such venues.  As Donny and Marie might say, ‘He’s a little bit country, he’s a little bit rock and roll’ Williams crossed over into various musical styles but his signature style was that of a crooner, ala ‘Moon River.’   I remember when ‘Can’t Get Lose To Losing YOu’ came out; I liked that one, even as a rock and roll kid. ‘Butterfly’ was even more rocky, at least  for the era.

Unfortnately , I never saw Williams live in concert. I went to Branson but  his concerts were sold out that weekend.  I felt bad for Any when he got caught in the trap of  Claudine Longet, his girlfriend at the time.  But the episode didn’t tarnish Williams clean cut image.

Williams would become best known for his TV Christmas shows, the last of a breed to bring the wholesome music in a variety format many of us looked forward to at Christmas.  Nobody else has come close in replicating the Christmas variety show.

Currently working on a comprehensive list of our favorite oldies  programs and channels on the net. Once again one can enjoy real oldies thanks to the web…

I first heard of Buddy Holly after he passed. I was in a record store in the mid-60s  in Stonestown, San Francisco and came upon ‘The Buddy Holly Story’; album and became fascinated with the liner notes of this and other Holly LPs in the Holly section. I read about how this young artist wrote and sang dozens of songs with a dozen or more hits before passing at the age of 22.  I was familiar with the big hits but never realized all the other tracks that producer Norman Petty fashioned with backing from ‘apartment tapes’ and other odds and ends that were left around.

passed with all these posthumous releases.  What a great version of ‘Love Is Strange’ with string backing from  another Petty group, the Fireballs, plus so many others…  Crying,  Waiting , Hoping… Wishing,… Fool’s Paradise…  There were other full songs like ‘Reminiscing’ with the great sax solo, which somehow missed the top of the charts.  Then there were those beautiful New York sessions with Buddy’s strings accomplished while he was still with us, early ’59… Raining in My Heart, Moondreams and especially the most beautiful ballad of them all, ‘True Love Ways.’  There were many more that Holly wrote and sang from the heart, not a loser among them…’mailman, bring me no more blues’… the Fats Domino tune, the Frogman tune.  the Diddly tune,  the Berry tune…Buiddy could write as well as cover…

I would join Bill Griggs great Holly Association and have many a great discussion with him . I even made it to Clovis, New Mexico to see the place where Holly recorded 90% of his music. All very surreal for me. If there are true geniuses and other-wordly ‘ people Holly was one of the theose.

I always felt sad about his passing, though it was before I really knew of him. I  wished he were still around and putting out more songs. Where would he have gone with  his career? Quite far, I’m sure.  I love that Holly,  who some used to describe as atypical rocker but today somehow fits in well and is remembered and revered more than many more recent artists.

Thanks Peter Asher for putting together the latest Holly tribute, ‘Listen To Me.’  If  you haven’t seen or heard be sure to check out your latest TV PBS listings for live performances from several of the originals who worked Holly including tje great Phil Everly,  Paul Anka (‘It Doesn’t Matter Any More’ ) and later artists like Asher, himself, who recorded ‘True Love Ways’ with partner Gordon and Graham Nash, who actually named his group, the Hollies after Holly!  Newer artists still revere the man. It’s beautiful…

There can’t be too many tributes to Holly. His music is so good it’s hard to go wrong so we welcome this new one. One day we’ll have to go back and  remember all the  previous ones…

So, here are some great clips to enjoy as we celebrate Buddy Holly’s birthday, today, tomorrow, always…. Well, alright!


Rare early footage of Holly along with Elvis and other artists on tour, circa 1955


If you get a chance tune in to KDAV, the station in Lubbock where Holly cut his teeth… still going strong and playing at least a Holly song an hour… Here’s some more from the new CD ‘Listen To Me.’ Celebrate with Holly’ls hometown Lubbock, Texas and Clovis, New Mexico , where Holly recording 95% of his music; festivals are underway in both places.